Southwest Airlines Social Media PR Disaster – What Would You Do?

No love for SWA

This past week Southwest Airlines experienced how one single customer with one single tweet and one single employee can result in a Public Relations disaster.

Duff Watson, a Father from MN, was kicked off a Southwest airlines flight after he sent a tweet that called out a specific gate agent by name.

I’m not going to get into the details for you as you can read more here in People magazine.   However, to be quick:

One single customer, tweeting one single tweet, and one single employee can create a PR disaster that no “crisis” communications agency can prepare you for.

This is the age of real time customer reactions to brand experiences.

What Would You Do?

I would have a clear policy in place that no single gate agent or staff member EVER demands that a customer remove their right to freedom of speech.

If a company wants to participate in the conversation with their customers, prospects and even “haters” then they need to take the good with the  bad.

In this particular case, the customer was not threatening the agent.  He did call her out by “name”, that much is true.  However, when you are in a public customer service role, at an AIRPORT !, there is no protection of your privacy.  There is no expectation that your photo should not be taken.  None.

SWA response online is here and below.

Do you think that they handled this well? 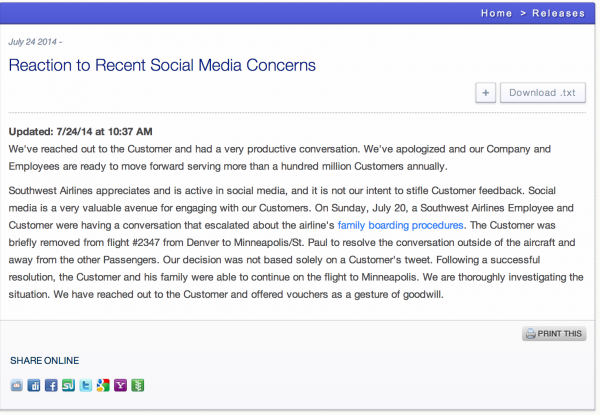 “I found Shaun to be one of the best all-around team players I’ve worked with in a long time. He focuses on all the right aspects of building and marketing profitable products that solve real customer problems. He has great product management skills.”